While experts continue addressing an issue with the cooling system of GOES-17’s Advanced Baseline Imager (ABI), they have made progress in increasing the available observing time of the affected infrared channels. Due to adjustments in operating procedures, the ABI is demonstrating improved performance from initial observations.

This new imagery shows data are currently available from all 16 ABI channels. Channel availability will fluctuate seasonally depending on the amount of solar radiation absorbed by the instrument. During the instrument’s “cool” seasons (near the summer and winter solstice), all channels are expected to be available 24 hours per day. During the instrument’s “warm” seasons (before and after the vernal and autumnal equinox), experts estimate 7 channels (bands 1-7) will be available 24 hours per day and the other 9 channels (bands 8-16) will have outages of 2-6 hours per night. These estimates are preliminary and are still being refined. The warmest part of the season is coming up in early September and performance estimates will need to be confirmed through observation during that time.

Infrared imagery is used to monitor aerosols, clouds, thunderstorms, hurricanes, rainfall, moisture, atmospheric motion, and volcanic ash. Among the channels that are expected to be fully available is the band that is used for fog/cloud identification at night and for fire/hot spot detection, which will be critical for forecasters in the western U.S. 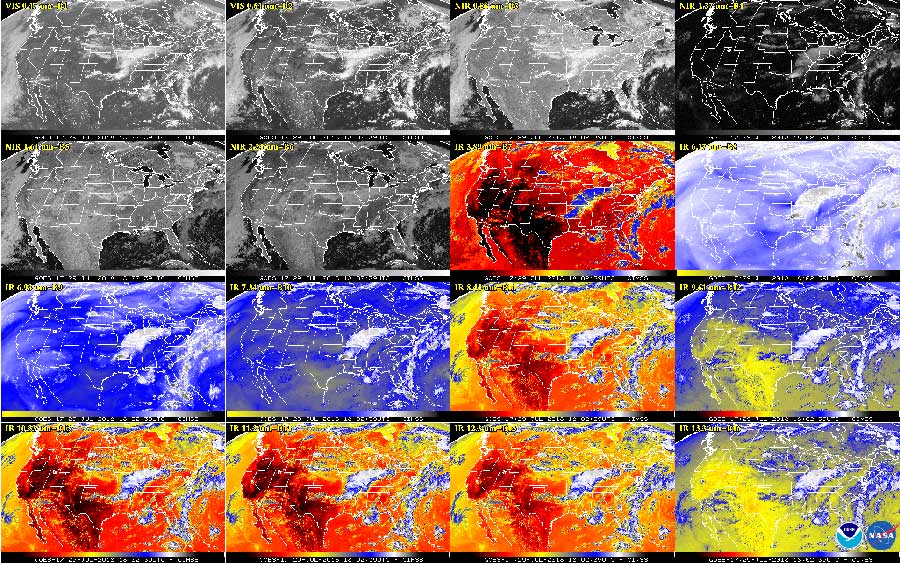 This 16-panel image shows a snapshot of the continental U.S. and surrounding oceans from each of the Advanced Baseline Imager channels at 2:02 p.m. EDT on July 29, 2018. This includes, from top left to bottom right, two visible channels, four near-infrared channels, and ten infrared channels. Each channel has a specific purpose in discerning meteorological and environmental features. A number of features can be seen in this image, including clouds over the mid-Mississippi region and off both coasts, the warm land temperatures over the Western U.S., and atmospheric moisture. This imagery was captured between the instrument’s “cool” and “warm” season, when all 16 channels are available 24 hours per day. During the instrument’s “warm” seasons, varied data outages are expected for 9 of the channels during nighttime hours. The ABI’s increased channels provide three times more spectral information than the previous GOES imager. Credit: NOAA/NASA

NOAA plans to move GOES-17 into operational service in late 2018. The operational configuration will be determined in consultation with the NOAA Office of Satellite and Product Operations, the National Weather Service, and other stakeholders. GOES-17 is currently observing with more channels, at a higher resolution, and with more rapid refresh than what is available from the current GOES West satellite. While the GOES-17 imager will not produce the full set of planned data, it will provide more and better data than currently available. Experts are confident the GOES constellation will continue to meet the operational needs of the National Weather Service and forecasters across the nation.

This color-enhanced imagery from one of GOES-17’s longwave infrared bands shows convective activity in the western U.S. on July 29, 2018. Band 14 is used to characterize atmospheric processes associated with thunderstorms and convective complexes. The cold clouds in this animation (colored red and black) are associated with a storm system that included reports of tornadoes, hail and strong wind. Credit: NOAA/NASA

NOAA released imagery from the visible and near-infrared bands not affected by the cooling system issue in May. The agency recently provided an update on the instrument’s performance and the latest information on the investigation. Listen to audio from the media teleconference.