With the advent of the GOES-R Series, forecasters now have an overwhelming amount of information to sift through. The Advanced Baseline Imager (ABI) instrument has 16 channels that image Earth’s weather, oceans and environment as often as every 30 seconds. How can meteorologists quickly discern the information they need to issue timely forecasts and warnings? Scientists are working on new ways to combine information from multiple ABI channels to enhance meteorological features of interest. The result is a variety of red-green-blue or “RGB” composite imagery. The stunning, colorful imagery you see from GOES-16 and GOES-17 isn’t just beautiful to look at, it also provides critical information to forecasters for situational awareness and nowcasting rapidly changing weather. 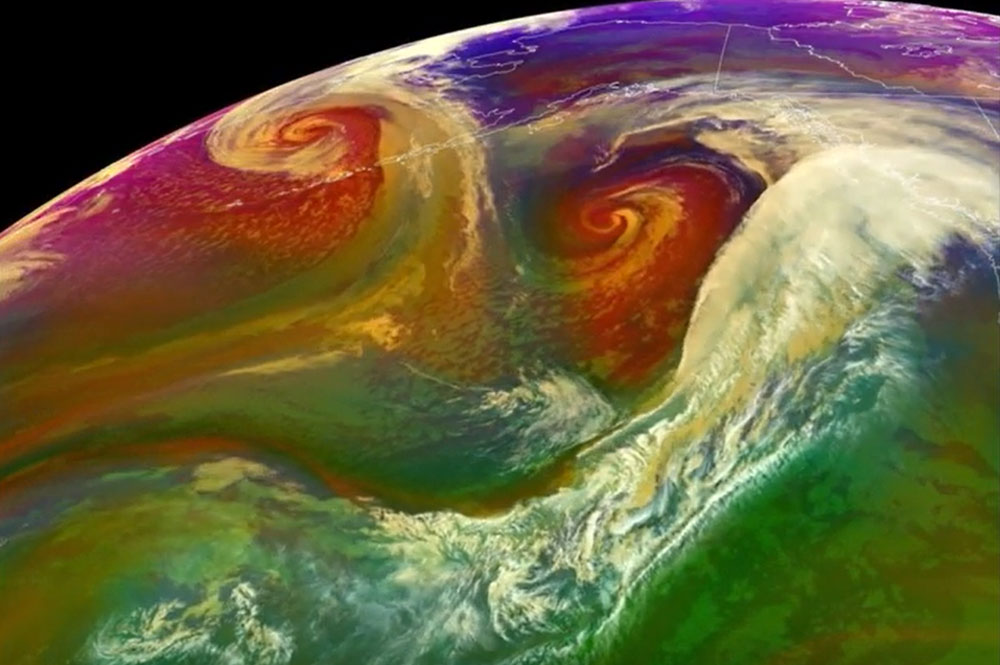 This GOES-17 (GOES West) air mass RGB imagery shows a hurricane-force low (the remnants of Super Typhoon Hagibis) over the Bering Sea and a storm-force low over the Gulf of Alaska on October 15, 2019. This type of imagery combines water vapor and infrared imagery from the ABI and is used to monitor the evolution of cyclones and jet streaks. It provides information on the middle and upper levels of the troposphere and distinguishes between high and mid-level clouds. Warmer air masses appear bright green, while colder and drier air masses appear blue and brown, respectively. High clouds appear white in this imagery and blue areas indicate cold, polar air. View animation of this air mass RGB. Credit: NOAA/CIRA

RGB composite imagery combines multispectral information from ABI to highlight the presence and evolution of important meteorological phenomena like fog, dust, fire hot spots and smoke, snow/ice, volcanic ash plumes, cloud properties, air mass temperature and moisture characteristics, and more. RGB imagery is created by combining two or more ABI channels, channel differences, or more complex operations into red, green, and blue color “components.” These are sometimes referred to as “color guns,” terminology inherited from the electron guns at the rear of old fashioned cathode-ray tube televisions, which combine these three primary colors at different intensities to form all the possible colors. When combined in a specific “recipe,” a single image results, with the colors combining to form all the possible colors perceivable by human vision. The final product highlights atmospheric and surface features (depending on the recipe enlisted) that are difficult or more time-consuming to distinguish with single-channel images alone.

GOES-16 (GOES East) fire temperature RGB imagery of the “Camp Fire” in northern California on November 8, 2018. The wildfire developed in the early morning hours and spread quickly within very windy and dry weather conditions. Hot spots and a large plume of smoke are seen in this imagery, which is created using fire temperature RGB imagery and making it partially transparent then placing it over a GeoColor enhancement, so both the fire's hot spots and smoke plume are visible. Credit: NOAA/CIRA

Assisting forecasters on the fly

Meteorologists operate in a time-critical environment and often aren’t able to examine every ABI channel to analyze and understand a particular scene of interest. Also, certain features are not always readily apparent from single channel imagery, but instead require taking the difference between two bands and scaling the output appropriately. These types of advanced data manipulations can be difficult for a forecaster working under tight deadlines. RGBs are an excellent way to display multispectral information in a single, easy-to-interpret image. RGBs can also be overlaid with quantitative information such as model data or other observational data, enabling more sophisticated analysis.

This dust RGB imagery from GOES-16 (GOES East) shows a large plume of dust from the desert southwest being dragged eastward, across northwestern Texas and east Oklahoma, by a front moving over the high plains in the early morning hours of March 24, 2017. The dust appears as magenta or pink. Also seen in this imagery is moist air (blue), thick mid-level clouds (brown), mid-level, thin clouds (green), and high, thin ice clouds (black). Credit: NOAA/CIRA

Many of the GOES-16 and GOES-17 images we see on TV and online are displayed in an RGB called “GeoColor.” This RGB uses five ABI channels and appears differently during daytime than at night. During the day, wavelengths from the red and blue portions of the visible light spectrum are merged with a simulated green channel (the ABI lacks a channel in the “green” portion of the spectrum) to approximate how the human eye observes the world via color vision. At night, infrared imagery is incorporated that shows high clouds as white and low clouds and fog as light blue (referred to as a “false color” enhancement). Also in the nighttime GeoColor imagery, a static “city lights” background map derived from clear-sky Suomi-NPP satellite Visible Infrared Imaging Radiometer Suite (VIIRS) Day/Night Band data is used to help orient weather phenomena to major population centers. The Day/Night Band is sensitive to extremely low signals of visible light as produced by cities and moonlight reflectance at night. GeoColor can be used to differentiate clouds from other features, such as smoke or blowing dust during the daytime, and for nighttime cloud detection. 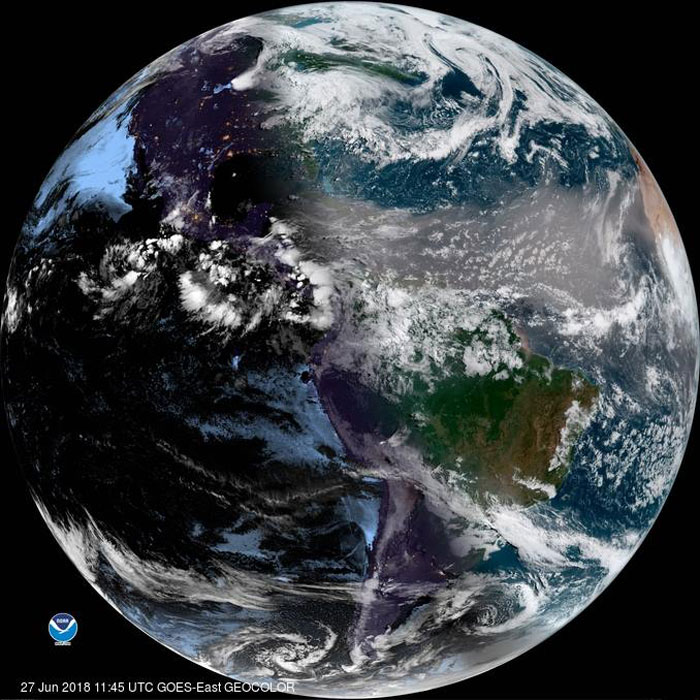 “I think of RGBs as a place where science meets art,” says Steven Miller, senior research scientist at the Cooperative Institute for Research in the Atmosphere (CIRA) in Fort Collins, Colorado, and developer of GeoColor. “Effective RGBs must strike a careful balance between the two; maximizing information content while minimizing interpretation time. Scientifically, it’s necessary to develop algorithms capable of distilling the complex scene into a targeted set of features. The design and construction of visually intuitive displays bring artistry into the fold. For the RGB to be most useful, it must clearly communicate multiple features unambiguously within a single display. With ABI, the canvass, brushes and paints available to developers in this regard have expanded dramatically.” 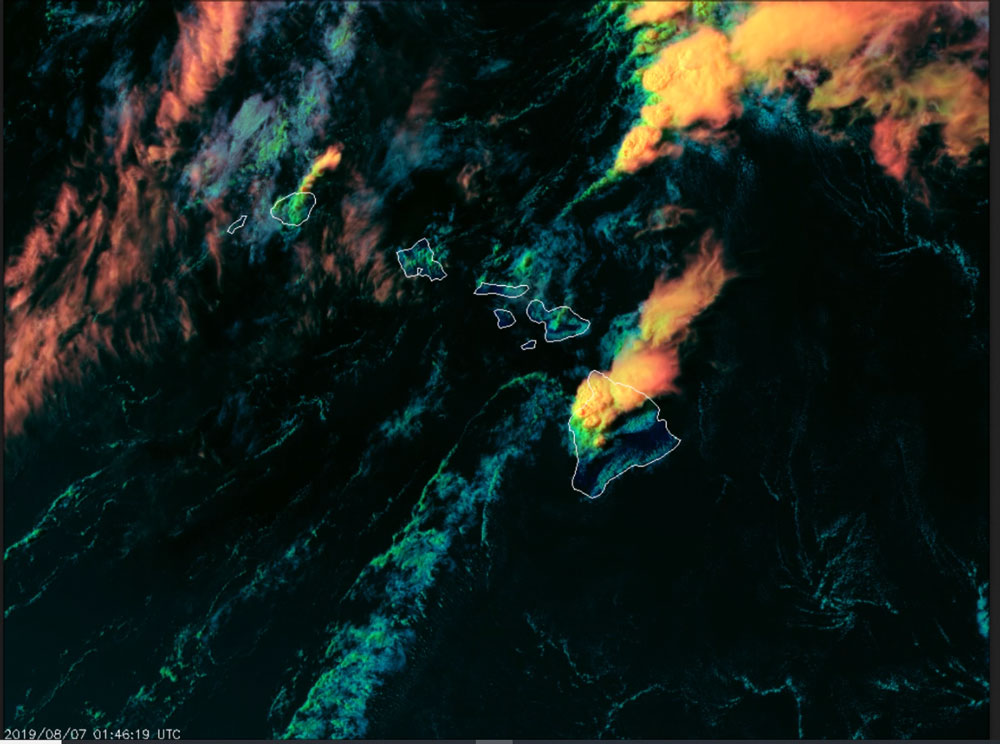 This day cloud phase distinction RGB imagery over Hawaii on August 7, 2019, captured by GOES-17 (GOES West), shows rare thunderstorms on the very arid, leeward side of Hawaii’s “Big Island.” This type of imagery is used to evaluate the phase (liquid, ice, or mixed) of cloud tops to monitor convective initiation, storm growth, and decay. Thin, high-level clouds with ice particles appear red/orange; thick, high-level clouds with ice particles are yellow; cloud particles that are transforming from water droplets to ice crystals appear green; and low-level clouds with water droplets are cyan and lavender. Forecasters can use this RGB to quickly identify the various stages of convective cloud development as they progress from cyan to green to yellow. View animation of the storms over Hawaii. Credit: NOAA/CIRA

Thanks to Dan Lindsey (NOAA/NESDIS/STAR) and Steven Miller (CIRA) for contributing information to this article.