NOAA’s Geostationary Operational Environmental Series satellite- R (GOES-R) will now be launched in October 2016. Earlier this year, NOAA, NASA and Lockheed Martin (the primary spacecraft developer) conducted an extensive review and decided moving the launch date from March 2016 to October 2016 would best mitigate possible schedule risks. The October 2016 date was determined by a number of factors, including launch site and booster availability.

Engineering teams working on the spacecraft and ground segment for the GOES-R satellite are making continued progress towards launch. Thermal vacuum testing, which exposes the satellite to the range of temperatures it will encounter in space, was completed in August. In November, the satellite ground system completed an important test to simulate spacecraft launch and satellite positioning. Also in November, an independent review of mission operations was successfully conducted which rated the GOES-R program as “green,” indicating the system is ready for operations and data processing after the satellite is launched. 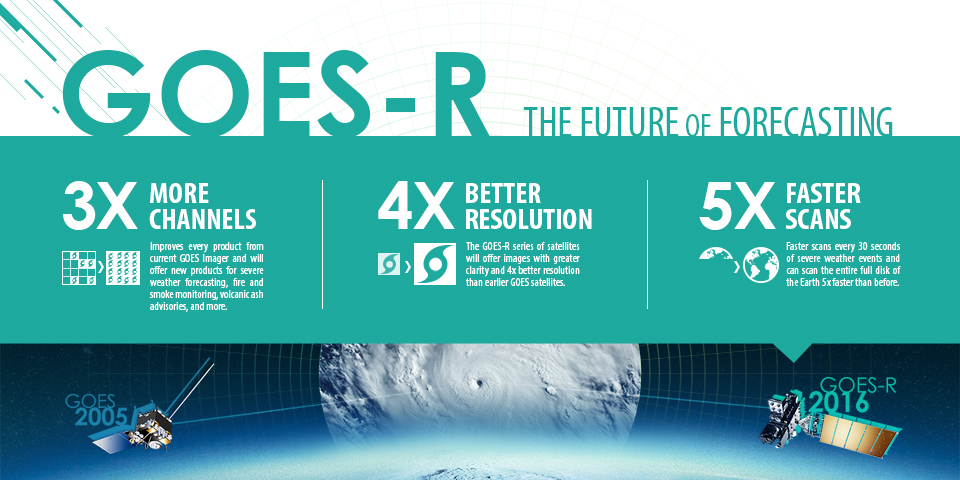 Weather satellites, like NOAA’s GOES satellites, are the backbone of National Weather Service (NWS) weather forecasts. NOAA has invested in a robust weather satellite program to ensure NWS has the latest observational tools to provide America with accurate, timely forecasts. The GOES-R satellite, which will be known as GOES-16 once it reaches geostationary orbit, will be more advanced than any other weather satellite of its kind and will provide more detailed and accurate data for forecasters.

Data from GOES-R will be a game changer for forecasters. The primary instrument on the new GOES-R satellite, the Advanced Baseline Imager (ABI), will collect three times more data and provide four times better resolution and more than five times faster coverage than current satellites. This means the satellite will scan Earth’s Western Hemisphere every five minutes and as often as every 30 seconds in areas where severe weather forms, as compared to approximately every 30 minutes with the current GOES satellites.

Other potentially dangerous phenomena can also be observed by the satellites, including volcanic ash clouds, dangerous fog, changing hurricane intensity and lightning. GOES-R will host a unique lightning instrument, called the Geostationary Lightning Mapper (GLM). GLM will provide total lightning data during the day and night over the Western hemisphere. Research has shown that lightning flash rate increases can be a predictor of impending severe weather and total lightning data from GLM has great potential to increase lead time for severe storm warnings.

These expedited data mean forecasts will be timelier, with more “real-time” information in them, allowing NWS to make those warnings and alerts much faster, thereby potentially saving lives. A faster forecast is economically significant for the nation, as commercial shipping and aviation are just two examples of industries that rely on up-to-date weather data for critical decisions about how to route ships and safely divert planes around hazards.

GOES-R will also be equipped with instruments to monitor space weather, which occurs when a solar wind shock wave or stream of magnetic particles from the sun affects Earth's magnetic field. These storms have the potential to bring significant disruptions to every major public infrastructure system, including power grids, telecommunications and GPS. Space weather observations from GOES-R will complement those from NOAA's DSCOVR mission, providing a comprehensive look at incoming solar storms. GOES-R will also be part of the Search and Rescue Satellite Aided Tracking (SARSAT) system. In 2014, the system helped saved 240 lives in the U.S. alone.

Once operational, the GOES-R/GOES-16 satellite will produce 3.5 terabytes of data per day, and like all NOAA satellites, the data will be available to the public at no cost. In October 2016, the satellite will be launched aboard an Atlas V 541 rocket from Space Launch Complex-41 at Cape Canaveral Air Force Station, Florida.

Check out these new animations that tell the story of GOES-R: