Atlantic hurricane season got off to an early and busy start this year and has been breaking records along the way. On August 6, NOAA issued its updated 2020 Atlantic Hurricane Season Outlook, predicting the possibility of an “extremely active” Atlantic Basin hurricane season. So far, the 2020 season has indeed been an active one, with eleven named storms through August 14. In fact, 2020 is shaping up to be one of the most active Atlantic hurricane seasons on record. 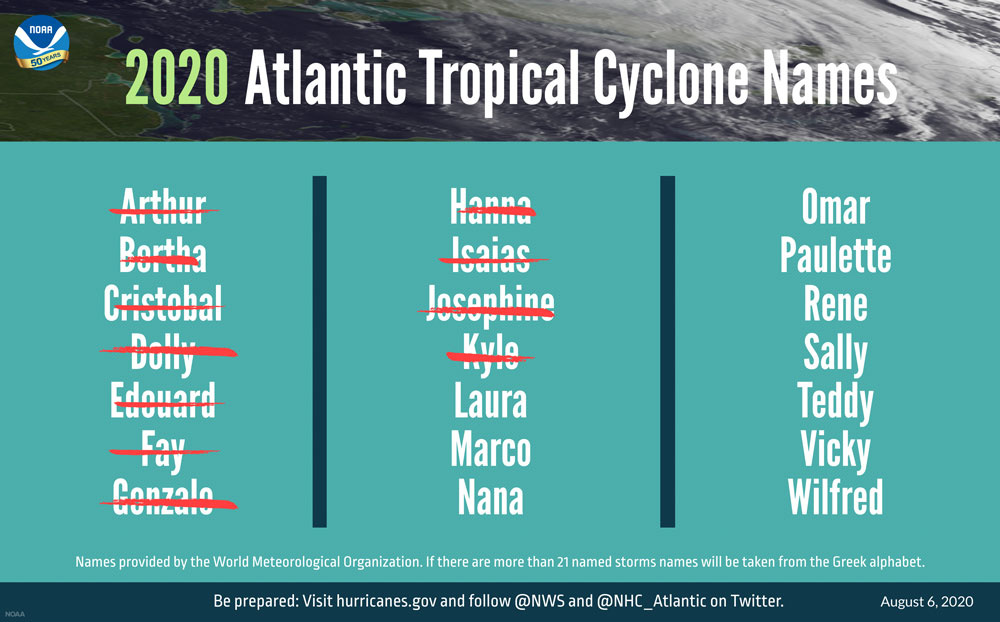 Let’s review the 2020 season so far as seen from NOAA’s fleet of Earth-observing satellites:

Hurricane season doesn’t officially begin until June 1, but May brought two named storms. This is the sixth year in a row that a named storm has formed before June.

Tropical Storm Arthur formed on May 17, becoming the first named storm of the 2020 Atlantic hurricane season. On May 27, Tropical Storm Bertha quickly developed and made landfall to the east of Charleston, South Carolina, in less than two hours. This was only the sixth time since 1851 that two named storms formed before June 1. 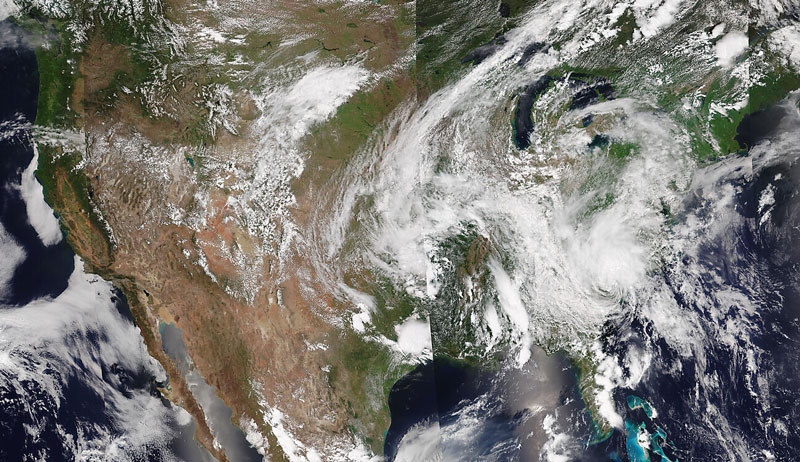 June added two record-breaking tropical storms, making the 2020 season only the third time on record that four named storms developed in the Atlantic before the end of June. The other two years were 2012 and 2016.

Tropical Storm Cristobal, which formed over the southwestern Gulf of Mexico on June 2, set a record as the earliest incidence of a third-named-storm in the Atlantic basin. Cristobal went on to break other records. After making landfall in Southeast Louisiana on June 7, the remnants of Cristobal entered Wisconsin on June 9. This was the farthest northwest a tropical system has traveled in North America and the first that crossed Lake Superior since records began in 1850. It also had the lowest pressure ever (988 millibars) recorded in Madison, Wisconsin, in June. The previous record was 990.2 millibars on June 1, 1936

GOES-16 GeoColor imagery of the remnants of Tropical Storm Cristobal as it approached Wisconsin on June 9. Credit: NOAA/CIRA

July brought five named storms and the season’s first and second hurricanes. The month’s five named Atlantic storms tied 2005 for the most storms during July on record. Each of the storms broke records dating back to the beginning of the satellite era in 1966. Also, in each instance, the previous record was set during the historic 2005 Atlantic hurricane season.

With nine named storms forming by the end of July, the 2020 Atlantic hurricane season set yet another record – the most named storms prior to August since the satellite era began. According to the historical record, the ninth-named-storm does not typically form until October 4.

Tropical Storm Fay developed off the coast of North Carolina on July 9. Fay was the earliest instance of an “F” named storm. The previous record was Franklin in 2005. Fay made landfall near Atlantic City, New Jersey, on July 10.

Tropical Storm Gonzalo formed in the Atlantic basin on July 22 and is the earliest "G" storm on record. The previous record was Gert on July 24, 2005.

On July 23, Tropical Storm Hanna developed in the Gulf of Mexico, becoming the earliest "H" storm on record. Harvey, which formed on August 3, 2005 held the previous record. Hanna became the first hurricane of the 2020 Atlantic hurricane season on July 25. Hurricane Hanna made landfall on Padre Island, Texas, on July 25 at 5 p.m. CDT with maximum sustained winds of 90 mph. Hanna made a second landfall at 7:15 p.m. in Kennedy County, Texas, again with maximum sustained winds of 90 mph. Hanna brought strong winds, flooding rainfall, an inundating storm surge, and several tornadoes to South Texas.

GOES-16 monitored Hurricane Hanna as it approached the Texas coast on July 25, in this visible imagery with lightning overlay. Credit: NOAA

Isaias produced heavy rains and flash flooding across the Dominican Republic, northern Haiti, Turks and Caicos, and the Bahamas, then traveled up the Atlantic coast. Isaias made landfall as a Category 1 hurricane near Ocean Isle Beach, North Carolina on August 3. 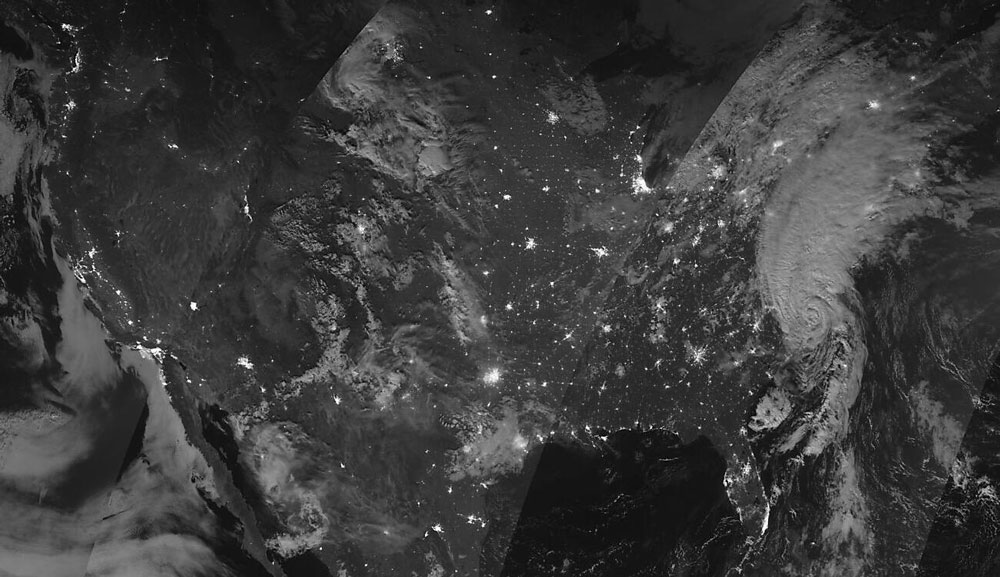 Tropical Storm Isaias as seen by the NOAA-20 Day-Night-Band on August 4, 2020. Credit: NOAA

Tropical Storm Kyle developed in the northwest Atlantic Ocean on August 14 and is the earliest “K” storm on record. Katrina, which formed on August 24, 2005, held the previous record. In an average Atlantic hurricane season, we wouldn’t see the eleventh-named-storm until late November.

GOES-16 monitored the formation of Tropical Storm Isaias on July 27, 2020, through its journey to landfall near Ocean Isle Beach, North Carolina as a Category 1 hurricane on August 3. Credit: NOAA/CIRA

What’s in store for the remainder of the 2020 Atlantic hurricane season? 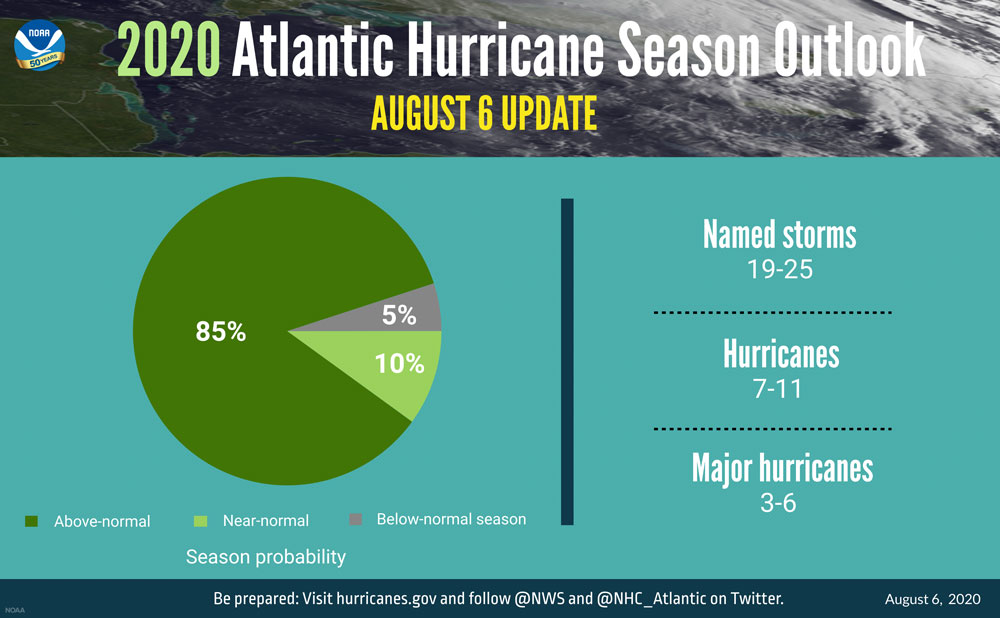 Another contributing climate factor this year is the possibility of La Niña developing in the months ahead. Indicative of cooler-than-average sea surface temperatures in the equatorial regions of the eastern Pacific Ocean, La Niña can further weaken the wind shear over the Atlantic Basin, which may allow storms to develop and intensify.

How do satellites help forecast and track hurricanes?

In 2020, for the first time, GOES-16 (GOES East) and GOES-17 (GOES-West) wind data are being fed into NOAA’s Hurricane Weather Research and Forecasting (HWRF) computer model used to forecast the track and intensity of tropical cyclones. Also new to the forecast model are data from the COSMIC-2, NOAA-20, and Suomi-NPP satellites. An evaluation of adding these new data sets to the HWRF model showed significant improvements in both track and intensity forecasts.

COSMIC-2 is a constellation of six small satellites that provides information about the distribution of temperature, pressure, and moisture content of the atmosphere. Measuring the moisture in and around tropical cyclones is important because it is a key ingredient for their development and intensification.

The JPSS polar-orbiting satellites (Suomi-NPP and NOAA-20) capture data over each spot on Earth twice a day. They measure the state of the atmosphere by taking precise measurements of sea surface temperatures and atmospheric temperature and moisture, which are critical to securing storm forecasts several days in advance. JPSS instruments provide data that is particularly useful in helping forecasters predict a hurricane’s path 3-7 days ahead of time.

NOAA-20 and Suomi-NPP also carry a microwave instrument that penetrates clouds and allows forecasters a look at the internal structure of tropical cyclones. This helps forecasters understand the intensity of these storms. The Day-Night Band on JPSS satellites allows forecasters to view hurricanes’ cloud structure at night and to monitor power outages for emergency response.

GOES-16 and GOES-17 continuously view the entire Atlantic and eastern/central Pacific hurricane basins to provide real-time tracking and monitoring of tropical cyclones as well as the environmental conditions that cause them to form.

By imaging a storm as often as every 30 seconds, these satellites help forecasters more easily discern the movement of cloud features and provide greater confidence in estimating the center of the storm. The added confidence in locating the center of circulation also helps guide reconnaissance aircraft (“hurricane hunters”) to the correct location.

GOES-16 and GOES- 17 also provide a detailed look at the storm properties of a hurricane, including cloud top cooling, central pressure, and convective structures as well as specific features of a hurricane’s eye, wind estimates, and lightning activity. This information is critical to estimating a storm’s intensity.

As we approach the peak of hurricane season, stay tuned to the National Hurricane Center for the latest information on tropical storm and hurricane activity in the Atlantic.